Fanatik claim Galatasaray Emre Mor’s agent is in transfer talks with Leeds United with regards to a loan move in this transfer window.

The 22 year old is expected to leave Galatasaray this month following a lack of game time, and Fanatik report his likely destination at this stage is Leeds United.

Mor has been linked with fellow Championship clubs Brentford and Swansea City in recent days, but the Turkish newspaper claims the former Borussia Dortmund player wants to play for Marcelo Bielsa’s side. 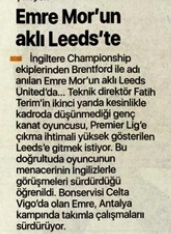 It’s reported Mor’s agent is in England to discuss a move with the Leeds United hierarchy and the player is waiting on the outcome whilst training with Galatasaray in Antalya.

This could be seen as a controversial move given Leeds United’s relationship with the Turkish club.

Mor has made 16 appearances for Gala in all competitions this season but hasn’t registered a goal or assist. His contract with his parent club Celta Vigo will expire at the end of June 2022.