Leeds United and Fulham have shown interest in Sporting’s Gonzalo Plata, who spent the 2021/22 season on loan at Real Valladolid.

The Spanish club, who achieved promotion to the top flight, have an option to make the winger’s stay permanent for €10m.

Plata wants to extend his stay at the newly promoted La Liga side, but the two clubs aren’t in talks.

That’s according to Diario de Valladolid, who question why the 21-year-old would give up €2m annual salary, offered by Fulham. The Cottagers are ‘close to formalising’ a €9.9m offer.

The Ecuador international and his representatives don’t favour a move to Fulham. They felt the same for Real Betis, another club to have come forward for the attacker.

Valladolid, for their part, cannot pay €10m to Sporting.

The Lions will have to pay 50 percent of the fee earned from his sale to his former club, Independiente del Valle, so don’t want to give discounts.

If Fulham, Valladolid or another club end up paying €10m, then Sporting will only be able to receive €5m fee from it. They believe it is very little for Plata and his market value could be around €20-30m, if he shines at the Qatar World Cup.

However, time is not on Sporting’s side since the South American’s deal expires in 2023. Plata does not want to sign a renewal and wants to continue at Valladolid.

The Spanish newspaper end their report by stating: ‘If he succeeds in Qatar, Plata would earn much more than at Real Valladolid and more than at Fulham. This is the move that all three sides have prepared. It can go well, badly, or an irrefutable offer pushes Sporting to throw down the house of cards, and the player to grab a big salary.’

It looks like a proposal could arrive soon for Plata and that could come from Leeds United. That’s according to today’s edition of Ecuadorian newspaper, El Diario.

Plata is ‘wanted by Leeds United’, and such is their intention to sign him that the Whites 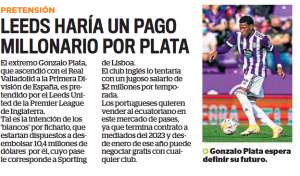 El Diario add Sporting want to sell Plata this summer in order to avoid losing him for free a year later.

There’s no mention whether Plata and his representatives are open to making a switch to Leeds.