Florian Thauvin joined Newcastle United from Marseille in 2015 and after a short stint with the Magpies, he rejoined the French club, initially on loan in 2016. His transfer to Marseille was made permanent last year.

The 25-year-old has revealed “everyone advised” against rejoining Marseille, despite his Newcastle struggles.

However, Thauvin didn’t listen to those suggestions and returned to Stade Vélodrome. The attacker says he doesn’t regret the decision, which is no surprise given how well it’s turned out.

“Everyone advised me not to come back. It was like throwing myself into the mouth of the wolf. I plugged my ears and got down to work. I set a course of action. Today, I do not regret my decision,” Thauvin told the French newspaper L’Equipe.

Thauvin failed to score or register an assist in the Premier League, when he was at Newcastle. However, the France international has bounced back and is one of the standout performers for Marseille in the last two campaigans. 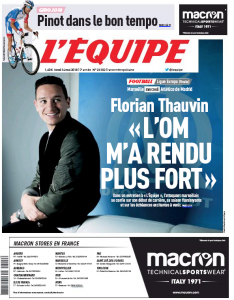 This season, he’s scored 22 goals and registered 11 assists in 34 Ligue 1 appearances. In addition to this, he has a chance to win silverware, if Marseille beat Atletico Madrid in the Europa League final on 16 May at Parc Olympique Lyonnais.

With a chance of getting into Didier Deschamps’ France World Cup squad, Thauvin has his career back on track. It’s a shame things didn’t work out at Newcastle, because the type of football the Frenchman is playing right now would have the St James’ Park faithful on their feet.