Atletico Madrid are struggling to sell their away allocation for their Champions League clash with Leicester City, report the Spanish media. The two clubs will meet at the King Power stadium later this month.

Marca have today reported Atletico Madrid are running out of time to sell their full away allocation with the deadline set for tomorrow. Under UEFA rules Leicester City must allocate 5% of this stadium’s capacity to the Spanish side, which equates to around 1,600.

However, Atletico Madrid are having trouble selling all their tickets for the game, which could free up seats for Leicester City fans. Due to the magnitude of the game the Premier League champions easily sold their home allocation, and some fans may now be given the opportunity to grab a ticket should Atletico return them and UEFA allow Leicester to take some of the away section. 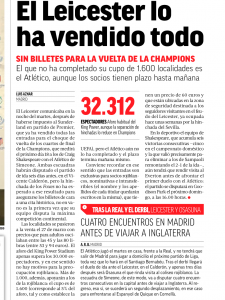 Despite Leicester City’s shaky season the club have impressed in the Champions League and this will be a huge night for fans.

Many wouldn’t have expected the Premier League side to get to the quarter finals after drawing Europa League holders Sevilla in the last round, especially given they trailed from the first leg.