Signing a new nine-year deal with Atlético Madrid last summer, Saúl Ñiguez is expected to stay with the Spanish club for the foreseeable future.

Coveted by the likes of Manchester United, the 23-year-old might have never want to play for José Mourinho’s current side anyways, just because of who his idol was growing up: Liverpool’s Steven Gerrard.

In a four-page feature for So Foot in France, the player’s father, José Antonio Ñiguez, revealed all.

He said: “He spent hours watching videos of [Gerrard], which is why he maybe looks a bit like him on the pitch. My son is box-to-box, as they say in England. In Spain, it’s a profile that never really existed, which is why Saúl, in this country, is seen as the prototype of the modern midfielder.” 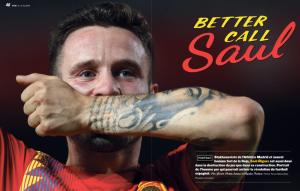 Starting his career in Real Madrid’s youth teams, the Atlético midfielder joined his current side in 2008 as a youth player, and doesn’t appear particularly interested in wearing another shirt anytime soon.

On top of loan at Rayo Vallecano for the 2013-14 season to get him some first-team experience, Saúl already has 132 La Liga appearances for Diego Simeone’s side, and totals 213 in all competitions, as well as 29 goals and 15 assists.

He’s still some way off the 710 Steven Gerrard racked up for Liverpool, but with another 10 years on his side, and eight years left on his contract, he has plenty of time to be the one club man the now Rangers manager was.

After that, he too can move to America and play for LA Galaxy.