Despite some recent rumours saying John Terry could be making a shock return to Aston Villa for the season, it seems the Championship side will still have to fight for the defender.

Terry is a free agent since leaving Villa Park at the end of his contract this summer, and is still to agree a deal with a new club.

But according to Pedro Madeira Rodrigues, who’s currently running for president at Portuguese side Sporting, the player will be joining him in case he wins the elections.

Madeira Rodrigues’ meeting with Terry had already been reported by the Portuguese press (with the pair pictured together), and in an interview with Sporting TV this Monday, the candidate talked a little about it. 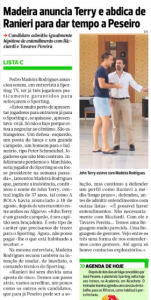 “I am very close to introducing players to already join Sporting and, if I wanted to, I could present them already. I just don’t do it because I am negotiating penny by penny,” Madeira Rodrigues told SportingTV (via A Bola). “They are foreigners. A left-back, a striker and a great champion, a man for the dressing room, like Peter Schmeichel. Players who do not have a contract. Unfortunately we lost Marchisio, he would be a Sporting player if I was president last week.”

When pressed to say if that was John Terry, he said: “John Terry is a great champion, he is a captain without an armband. It’s this kind of character that we need to bring to Sporting. Now I can’t pay him what he’s used to receiving.”

By the way he talks, maybe Aston Villa would have better financial conditions to sign John Terry. So he would only join Sporting if he’s really up for a different challenge.

Sporting’s elections will be taking place next Saturday.