As we near the end of the transfer window, time is running out for Aston Villa to sign Rodrigo Bentancur from Juventus, as the Uruguayan is a target for Steven Gerrard.

Having already heavily recruited in the January window to please their new manager, the Villans could still make one final signing if they manage to convince both the Italian side and the player before Monday evening.

Corriere dello Sport on Friday believe they will do their best, but whether it’s enough remains to be seen.

The Italian newspaper, looking at the various deals Juventus could pull off in the next few days, explain ‘the next move by Aston Villa is expected’.

As things stand, there is a proposal of €22m, bonuses included, ‘on the plate’ for the midfielder, but Juve ‘are asking for almost €30m’ because they know they have to give around 35% of whatever fee they receive to Boca. 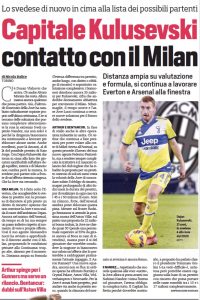 There is also ‘no yes from the player, who would like to end the season’ in Italy, although he ‘evaluates an offer that would lead him to practically double his current salary’, which was already reported on Thursday.

Now we just have to wait for Aston Villa to up their offer, because it could be that if Juventus accepts their bid, Bentancur could feel that earning more elsewhere might actually best for his career, even if it is in Birmingham instead of Turin.