Portuguese newspaper O Jogo writes today about the situation of Paulinho, who could be leaving Braga for a foreign side in this transfer window.

They say his club continue to demand €30m for his sale, since this is the amount of his release clause. But those who want him haven’t shown they can pay over €15m.

O Jogo claims there’s a specific side who could’ve taken Paulinho this summer, and that’s Aston Villa, but the move was conditional on the arrival of manager Bruno Lage. 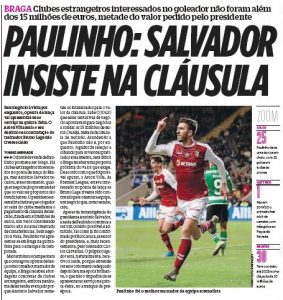 There had been rumours in the Portuguese media last month saying Lage could take charge of Aston Villa this summer. It was in late July that the local press reported that the move was off.

O Jogo now says that the Premier League side were interested in signing Paulinho to work with the former Benfica boss, and ended up giving up on the striker after the managerial change was shelved.

The player continues to look for a new club, with Aston Villa now likely out of the picture.