Aston Villa signed Wesley Moraes from Club Brugge in the summer and in the same window, the Jupiler Pro League side strengthened their attack by acquiring the services of David Okereke and Mbaye Diagne.

Diagne arrived at Brugge on loan from Galatasaray on deadline day and has impressed by scoring three goals in three league appearances.

Friday’s edition of Het Belang van Limburg explains the Senegal international could have been Wesley’s teammate at Villa Park, but the English side couldn’t get the deal over the line.

It’s claimed Dean Smith’s side ‘wanted’ the forward in the summer and the Turkish side demanded €15m to complete his transfer, which Aston Villa were unwilling to meet.

A loan move to the Premier League was considered, but a handful of appearances for Senegal made that difficult. 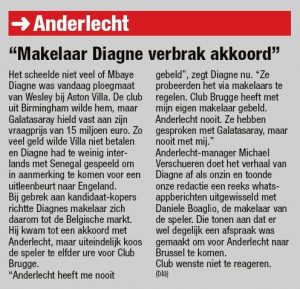 After failing to find any potential buyers, Diagne’s representative focused on the Belgian market.

Prior to joining Brugge, Anderlecht were credited with an interest, but their league rivals were successful in acquiring his services for a temporary spell.