Jordan Amavi leaving Aston Villa to be part of Marseille’s exciting new project is a good news story in many respects. Since moving to Aston Villa, the fullback didn’t enjoy the best of luck.

Injured whilst away with France’s U21 side, at the time time Amavi was considered an outside chance for France’s Euro 2016 squad. Instead, the youngster saw his new club relegated, thrown into crisis, and his own standing drop ahead of a battle to return from injury.

When Amavi did fight back from injury, he got to work in the Championship for Aston Villa, and showed enough signs of quality to attract several interested clubs. Sevilla then came in and, in what’s all too typical style for the Spanish club, turned the screws on a transfer, and ultimately blamed the player failing a medical for its collapse.

That was a blow to both Aston Villa and Amavi, but Marseille were satisfied with Villa’s medical reports, and their own checks, and have signed the player on a deal which will almost certainly turn permanent for €10m.

Marseille are talking the transfer up, with genuine excitement around Amavi’s arrival from Aston Villa. Friday’s edition of L’Equipe says that Marseille have been planning the 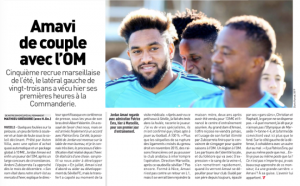 swoop since December, and Andoni Zubizarreta is quoted as saying: “His name was on our shortlist in the winter market.”

Zubi also explained Marseille made attempts in the winter market to sign Amavi, but weren’t able to. The player hadn’t been keen on a return to France, but after his Sevilla nightmare, Marseille became all the more attractive.