Aston Villa defender Jordan Amavi has told the French media he wants to leave the club after interest from elsewhere. The Frenchman joined Aston Villa from Nice in 2015, and his first season was ruined by an injury picked up whilst on international duty.

L’Equipe have reported on comments made by the Aston Villa star, who confirmed he wants to find a club which is competing in all competitions, including in Europe. Amavi would be interested in a move back to the English top flight, but the 23-year-old would also be open to play in other leagues.

“I want to play Europe, in a club that plays on all fronts. There are clubs that come to ask, we discuss, even if there is nothing concrete yet. I love the Premier League, it’s a Championship that I like, but I’m open to other countries. If the sporting challenge is interesting, I will go ahead, I will not think,” said the Aston Villa defender. 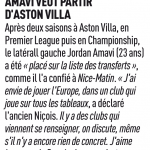 Last month we covered reports from Italy that Napoli could look to sign Amavi this summer.

With Aston Villa failing to win promotion back to the Premier League the Frenchman may decide to move on, and a transfer to Serie A could be tempting.

Steve Bruce will likely be planning for life without Amavi at Aston Villa, and now the club just have to get the best transfer fee they can.