The Turkish newspaper report Aston Villa scouts travelled to Trabzon at the start of the month for the clash between between Trabzonspor and Fenerbahce. It’s reported their intention was to get a lowdown on Fenerbahce forward Vedat Muriqi, but it was Alexander Sörloth who impressed them.

The Norwegian striker has scored 16 goals and provided six assists in the league this season and he’s currently one of the standout players in the Super Lig.

His performances have led to interest from other clubs such as AS Monaco, but Aksam claim Aston Villa are also in the picture to land the Crystal Palace owned attacker. 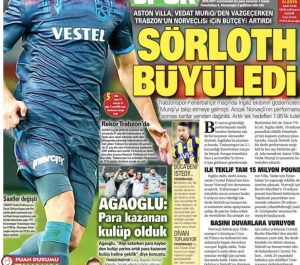 Karadeniz Firtinasi have the option to make his move permanent for €6m but it’s reported Villa are prepared to offer £15m to Trabzonspor to sign the player this summer and talks will commence when this season is over.

Sörloth’s contract with Crystal Palace will expire at the end of June 2022.