Home Europe Aston Villa have not yet ‘won the will’ of player to join...
SHARE

Maxi Gomez to Aston Villa claims seem to be getting a little carried away, and likely all come from what Juanfran said earlier this week.

The former Celta Vigo player now works in recruitment for Villa, focusing on Spain and Portugal, and this week he talked up Gomez’s suitability for the Premier League.

Juanfran explained: “He has a profile of a Premier League player, for his conditions, for having an important aerial game, because he can give you different variables coming out with the ball from behind, for the strike he has or mobility.

“He is a reference nine, he is always well placed, attentive to the second plays, above all what is asked of a striker is a goal. He has it and that’s why he interests the Premier League and other competitions.”

It would appear those comments were confused in Gomez’s native Uruguay, with an official at his former club, Defensor, suggesting he’d heard Villa are keen.

Defensor have talked a lot about Gomez rumours, happy to do so because they’ll get kickback from a transfer fee. 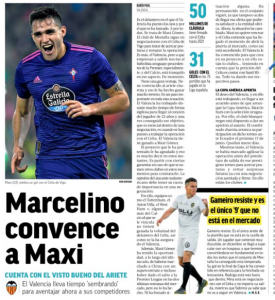 Marca now list Aston Villa as one of the interested clubs, although it’s likely all from the same line of rumour.

They say none of Villa, Tottenham or West Ham have ‘won the will’ of the player, because he’s keen on a move to Valencia. Marca explain the player is insistent his desire is taken into account when choosing a new club, and right now Los Che are presented as favourites.