Home Premier League Arsenal Aston Villa ‘not club of his dreams’ – Player would have preferred...
SHARE

At times in recent years, Morgan Sanson has seemed like a piece of meat dangled around Premier League clubs during transfer windows. Multiple sides from England’s top division have been linked, with some of those claims being presented as pretty serious at various points.

Now the Marseille midfielder is set to sign for Aston Villa, and L’Equipe couldn’t help themselves from having a little dig.

The French newspaper claim that Sanson wasn’t exactly aiming for a club like Aston Villa, and would have preferred to sign for Arsenal: ‘At 26, he saw himself more in teams of Arsenal’s standing, although he can take comfort in thinking that the Gunners (11th) are not much better ranked than his new teammates.

‘And it was to join an English top 6 club that he changed agents a year and a half ago, approaching businessman Pini Zahavi. He will have to be patient and win in a championship made for his qualities, before perhaps seeing higher, while the fact of never having been called up for selection with the Blues could have been a brake for other contenders.’

Aston Villa are currently eighth in the Premier League, two points ahead of Arsenal despite playing two games less. Should the Birmingham club win the games they have in hand over Liverpool, they’d go above the Reds. 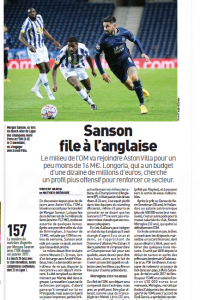 That said, that Villa fought against relegation last season will surely weigh heavily on how L’Equipe see things.

Arsenal have been linked to Sanson, as recently as last year, but it didn’t appear there was any serious interest this time around.