Earlier on Friday, we covered a report from Italy claiming that Newcastle United had made their move to try and sign Alessio Romagnoli on a free.

After all, the soon-to-be-ex-Milan player is an attractive prospect for most teams, and it made a lot of sense for the Magpies, who need defensive reinforcements, to move for him.

However, they aren’t the only ones to have taken an interest in him, as Aston Villa are also in the mix, according to Corriere dello Sport.

This isn’t the first time the two clubs have vied for the same player, with the Villans pipping the Magpies to Diego Carlos earlier on in the window, and a similar battle is brewing for Romagnoli.

It’s explained that Newcastle are ‘coming up with a proposed wage approaching €4m/year’, but this ‘also enticed Aston Villa, who moved in the same way (and with similar parameters)’.

This means they are engaged in an ‘all-English head-to-head’, which has sent ‘alarms bells’ ringing at Lazio, who were once the favourites to land the Milan man. 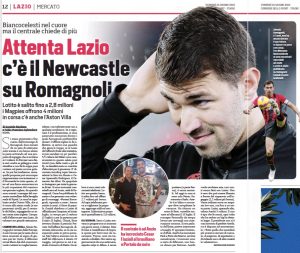 Corriere do point out the player is ‘tempted’ by a move to the Premier League, and ‘it is only the love for Lazio that keeps him anchored to the dream of playing for them’.

That being said, he won’t do that ‘under any conditions’, meaning the money must also be right for him to commit.

This is why ‘the English offer makes him reflect’, because Claudio Lotito, the Lazio president, ‘had started low and then went up to offer €2.7m + bonuses’.

While he is improving that with every phone call he makes, he’s only adding ‘money with a pipette’, with the ‘very last proposal quantified at €2.8m/year’.

That’s still some way off the €4m from England, which is why Newcastle and Aston Villa still stand a chance in all this.