Trabzonspor are in the market for central midfielders after John Obi Mikel, Jose Sosa and Badou Ndiaye all left the club. It’s claimed Aston Villa’s Nakamba is a priority for the former Chelsea coach, but the player wants to remain with the Premier League club.

With Villa securing their place in the English top flight on the last day of the season the midfielder wants to commit himself to them. 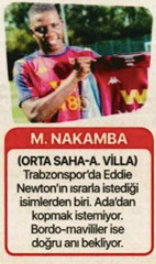 However, despite Nakamba intentions to stay in England, Fotomac claim Trabzonspor will still try to convince him over a move, and that they will wait for the right moment before submitting an offer for the 26 year old.

Nakamba joined Aston Villa from Club Brugge last summer for €12m and he went on to make 34 appearances for Dean Smith’s side in all competitions last season.

His contract at Villa Park will expire at the end of June 2024.