Ever since it was clear that AS Roma would not be getting Granit Xhaka, there has been a shift in their attempts to find a new regista for José Mourinho.

One of the names to soon emerge was that of Douglas Luiz, currently playing for Aston Villa in the Premier League under Steven Gerrard.

The previously reported price tag of around €40m was always seen as too high for the Serie A side, but this summer could be a bit different.

The reason for that is the Aston Villa star’s contractual situation, since his current deal expires in 2023, with no renewal seemingly near.

This gives Roma a chance to get a player that was previously seen as almost unattainable, and Corriere dello Sport’s Rome edition refer to him as the ‘dream’ for the role. 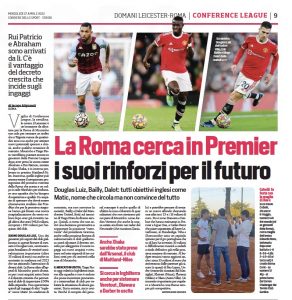 The 23-year-old, who has a goal and three assists in 29 appearances in all competitions for Aston Villa, is ‘one of the players most followed’ by AS Roma on the transfer market.

It’s made clear he would still have an ‘important valuation’ of over €35m, but the club are aware they would be able to use the growth decree in Italy to ‘save 50%’ of the salary costs and therefore potentially use that on the transfer fee.

This helps them a bit in their endeavour, and it’s certainly a situation to keep an eye on, because the last thing Aston Villa will want is to lose Luiz on a free, having initially paid Manchester City £15m for his services in 2019.