Aston Villa midfielder Douglas Luiz remains Roma’s number one target for their midfield this summer, even after the signing of Nemanja Matic.

That’s according to Gazzetta Dello Sport, who say the Brazilian was the player the club ‘identified some time ago’ as they want to add to their squad.

They explain that while Matic has been signed, Jose Mourinho also wants someone who is a dribbler with ‘footballing ability and technical quality’ to boot.

Luiz is said to be ‘eager’ to leave Aston Villa and take on a new challenge, particularly after Villa moved to sign Boubacar Kamara last month, and joining Mourinho in Roma fits into that idea.

Roma want to make it happen, and the midfielder has been in their ‘desires’. They’ve identified him as the player who can manage the balance in the middle of the field.

Aston Villa have valued the Brazilian at €30-35m, but Roma believe that because his contract is expiring next summer, there is the possibility of a deal at €22-23m instead.

That would be a ‘bargain’ price considering the quality of the player and the fact he could grow under Mourinho and be resold for a profit in future. 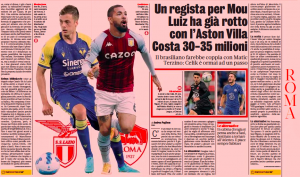 There is also the possibility that if they can get a deal done before June 30th, they can take advantage of tax benefits, the Italian Growth Decree, to make a transfer more palatable.

Luiz currently earns €3m a year at Aston Villa but using those tax reliefs, Roma could go as high as €4m, thus providing the midfielder with a nice wage increase as well.

A deal will have to be worked out with Villa first, but there is a sense, at least as far as Gazzetta are concerned, that there is a deal there to be done.