Aston Villa released John Terry and Christopher Samba at the end of the last season and have re-signed Axel Tuanzebe on loan from Manchester United.

The Championship club are still not done in strengthening their back line and have turned their attention towards Le Havre’s Harold Moukoudi, reports today’s edition of L’Equipe.

Steve Bruce’s side ‘want’ him and have already tabled an offer of €9m for the Ligue 2 defender, who has one year left on his contract.

The English club are not the only side interested in the centre-back as the report claims Ligue 1 side Rennes have been working on his profile for the last few weeks.

In addition to this, the 6ft 3in player would prefer an option to play for the top flight club in France over Aston Villa, meaning it could be difficult for the Birmingham club to secure his services. 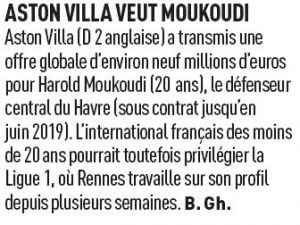 Le Havre defeated Ligue 2 side Brest on penalties in Coupe de la Ligue on Tuesday and Moukoudi, who was on the bench, did not feature for his side.