Record said the defender was joining Vitória Guimarães, even though there had been no details on the deal between the clubs.

Vitória Guimarães ended up making the move official in the afternoon, and now there’s a little more information about the transfer.

Record says the Portuguese side only have rights over 70% of the player, since Aston Villa are keeping 30% of a future sale. 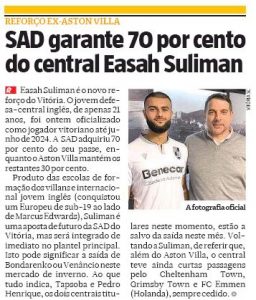 And even though Suliman was part of Aston Villa’s U23 squad and is seen by Vitória Guimarães as a player for the future, he’s expected to immediately join the Portuguese side’s first team.

His arrival should even result in the departure of other defenders from the squad.

A fee isn’t mentioned, either in Vitória’s official statement or in the reports from the local media. So perhaps there wasn’t money involved, with Aston Villa only keeping the percentage of a future sale.