Aaron Hickey has been linked with Premier League clubs since before he moved to Bologna from Hearts in 2020, and he’s been repeatedly linked since then.

Last year, the 19-year-old struggled for prominence in Serie A, due to injuries, a spell out with Covid-19, and managerial choices. Then he was limited to 11 appearances, but this campaign he’s already had 20 outings in the league and is much more important.

Across those matches, Hickey has scored four goals, with two of those coming in his last four matches. That’s seen transfer claims build, and Aston Villa have been dragged into the picture.

Tuttosport report Aston Villa interest ‘filters’ through, and say it’s manager Steven Gerrard leading the race. According to the claims, Gerrard has been keen for some time, which would suggest his interest predates him taking over at the Birmingham club. 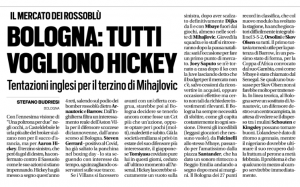 Without any offer arriving or even contact being made at this point, there’s no decision for Bologna to make on the ‘English temptations’ for their player, however, it is made clear that Villa have been sending scouts to keep an eye on Hickey.