According to Fanatik, Galatasaray are interested in signing the Genk striker Mbwana Samatta but it’s claimed the Turkish club are facing competition from Aston Villa.

The 26 year old has been linked with the Premier League side in recent weeks.

It’s expected the striker will leave Genk this summer after scoring 32 goals in 51 appearances last season, and Fanatik say Galatasaray officials are working hard to get the player.

Gala are likely to sell Mbaye Diagne in this window, who has been linked with Southampton, Crystal Palace and Brighton in the past week, and Fanatik claim Samatta could be a replacement if the Senegal international leaves.

However, Genk are demanding €10m for the player and Aston Villa being interested is making things difficult for Gala. 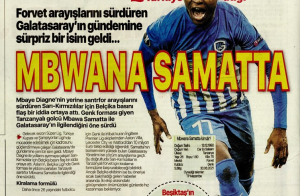 They are now hoping to use the Champions League factor to gain advantage over Villa and they are looking to loan the player with a mandatory option to buy next summer.

The Super Lig side will start next season’s UEFA competition in the group stages after wining the league.

Samatta is under contract with Genk until June 2021.

‘Continuing dialogue’ – Newcastle could get ‘white smoke’ on manager ‘in...