For the past few weeks, the Portuguese press has been pretty certain that Moussa Marega is leaving Porto for the Premier League this summer.

There’s a particular newspaper, A Bola, who says he’s joining West Ham. But other outlets keep saying there are still other options for his future.

And today, O Jogo also lists Aston Villa, Everton and Swansea City as the other clubs who could be landing the striker, alongside the Hammers.

It’s claimed that despite blocking the player’s move to the Premier League last summer, Porto would now accept to sell him, since they want to make a total of €100m from departures in the next few months. 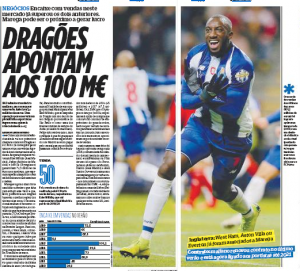 To let Marega go, the Dragons will demand €30m this time, not matter if it’s West Ham, Aston Villa, Everton or Swansea coming for him.

The Hammers have strongly been linked to Marega for a while, and the same goes for Everton. Now Villa, just like Swansea, had been last linked in 2018, and see themselves getting a mention again.

Perhaps the Premier League promotion will help Dean Smith’s side to land the striker, but it’s quite unlikely that he would be heading to the Liberty Stadium to play the Championship.

Marega scored 21 goals and assisted teammates 11 times in all competitions for Porto last season, doing so in 47 appearances.