Aston Villa and Derby County will both have been well aware that keeping Tammy Abraham and Mason Mount beyond the end of this season would be difficult, especially if the youngsters did well.

Chelsea may consider new loans, or even a permanent transfer, but a lot will depend on what happens with the Premier League club’s transfer ban. A removal, delay or reduction could make it likelier that the two footballers find new homes this summer.

This week’s edition of SportBild reports that the Aston Villa and Derby County loanees have caught the eye of RB Leipzig. The German club want to kick on next season and know there’s a very good chance they’ll need to be replacing Timo Werner.

Werner is expected to leave, most likely for Bayern Munich, and Villa’s Abraham would be seen as a replacement for him. 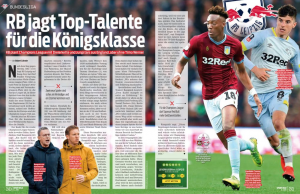 Ever since Jadon Sancho moved to Borussia Dortmund and did so well, Bundesliga clubs have been looking towards England for potential low cost recruits. It’s likely that interest from other clubs, potentially Aston Villa and Derby County themselves, would make moves for Abraham and Mount anything but cheap.