Aston Villa may face competition from Celtic for Roma’s Robin Olsen this summer, with both clubs eyeing the goalkeeper.

That’s according to Corriere Dello Sport, who say the player is one Roma are looking to get rid of as they look to raise funds for their own transfer business.

Olsen was linked to Aston Villa by Corriere yesterday, with the newspaper stating he ‘could become an objective’ for the club this summer, and Celtic are being pulled into the picture.

Aston Villa are still without Tom Heaton and with Pepe Reina set to return to AC Milan, need a new goalkeeper to fill the void.

Their recent appointment of Johan Lange as director of football means a move to Villa Park would make sense too, although we speculated it could just be the newspaper putting two and two together and getting five.

Either way, they double down on their claim today and say he is being ‘followed’ by Aston Villa, again referencing Lange’s arrival as a reason why it can happen.

However, Villa face competition as far as they are concerned, with them also naming Celtic as one of his suitors. 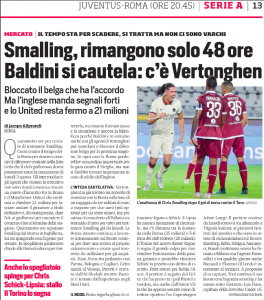 The Scottish champions have lost both Craig Gordon and Fraser Forster this summer and so are in need of a new goalkeeper to fill the void.

The newspaper makes no mention of whether Celtic or Villa have made their move for the 30-year-old yet, or if he’d even be interested in a transfer, just that the interest is there.