Back when Aaron Hickey was at Hearts of Midlothian, there was a battle for his services.

Many clubs came knocking on his door, which included Celtic, Rangers, Bayern Munich and Aston Villa, but, in the end, and perhaps surprisingly, Bologna in Serie A won the race.

The now 19-year-old kicked off his first season as a starter, but Covid-19 and then a surgery ended it earlier than expected, meaning this year was his year to shine, which he has done.

Scoring two goals in his first seven games, the left-back is earning rave reviews in Italy, and Corriere dello Sport recall that a few clubs once again wanted to sign him despite the injury issues that kept him out of action. 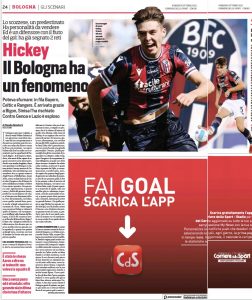 They state that in the summer, ‘the two Glasgow clubs looked for him again, and Aston Villa also came forward, but he was absolutely not transferable for Bologna’.

While he might not be ‘the new [Andy] Robertson’, Corriere point out his future ‘will be full of lights’, such is the potential he has shown under Sinisa Mihajlovic this Eason.

As for Aston Villa, they will either have to play the patient game to get Hickey, most likely next summer when Ashley Young’s contract expires, or move onto another young defender to provide competition for Matt Targett.