Linked with a move to Aston Villa even before he transferred to Bologna, Aaron Hickey never left the list of targets at Villa Park.

Finally flourishing in Italy this season, the Scottish left-back has attracted a lot of praise with his performances, which has, in turn, led to more interest being shown in him.

The Villans are among those to be recently pushed with a move for the defender, and Il Resto del Carlino on Sunday go as far as saying that a first step has been taken with the next transfer window in mind.

In fact, they made an attempt in the summer, which was reported by Corriere dello Sport earlier this month, but the local newspaper believe they will likely try again in the winter.

Il Resto del Carlino write that Aston Villa have ‘asked for news in view of January’. 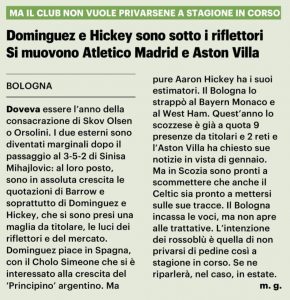 As for Bologna in all this, they ‘receive the voices but don’t open negotiations’, because their intention is to ‘not deprive themselves of pieces midway through the season’.

What could happen, however, is that they’ll ‘talk about it again in the summer’, at which point Aston Villa should have a far better chance of getting their man than they do currently.