The centre-back’s contract runs down in 2021, and he has so far not committed his future to the Etihad club.

‘Renewal or sale’ is written in bold in today’s edition of Marca.

Pep Guardiola’s side are aware of the Catalan club’s interest in the Spain U21 international.

It’s claimed the teenager is ‘first in the list of reinforcements’ for Barca because his profile not only fits their requirement, but the defender is a ‘young footballer with projection’ and can adapt easily at the Camp Nou, having already spent time at La Masia.

City, however, don’t want to sell the player and have tabled an important renewal proposal.

García is ‘thinking about’ the two options. On one hand, he has an opportunity to fulfil his dream of playing for Barcelona, and on other hand he knows Guardiola counts on him at City.

It’ll be interesting to see if the former Bayern Munich manager continues to trust his compatriot in the Champions League fixtures. The newspaper believes it could be an important factor.

Marca state: ‘The ball is in the hands of the footballer who can choose his destination and both options are very attractive.’

The Premier League side are clear if the player decides against signing an extension, he will be sold this summer.

City and Barcelona have so far not discussed the transfer fee, but Marca are of the belief it will be between €15m and €20m. The price won’t be high because of the duration left on García’s contract. 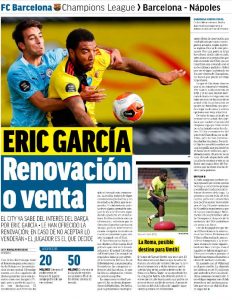 Quique Setién’s side are also aware they could fail in their efforts to sign the youngster.

Marca claim Guardiola’s ‘seductive power’ is crucial, and with City’s Champions League ban lifted, these two factors could be a ‘weapon’ for the English club.

Barca have identified Villarreal’s Pau Torres as ‘Plan B’, if they fail to sign García.