As Benfica prepare to take on Manchester United at Old Trafford in the Champions League tomorrow, Portuguese newspaper Record made a list of all the Lisbon side’s players who have been linked, or are wanted, by English clubs.

One on the list, and it’s a surprising one, is Andrija Zivkovic. The outlet recalls Arsenal’s long time chase for him, although it feels a little forced.

Record claims that Zivkovic has been on Arsenal’s radar since his time at Partizan. The interest continued as the Premier League club sent scouts to watch him playing in Euro U21, and also have scouts regularly following the games at Benfica. 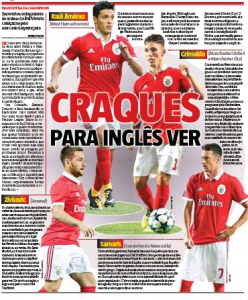 Now they claim that Arsene Wenger will have another chance to watch him at Old Trafford, but they don’t know what Arsenal would then do if he impresses on that opportunity.

Currently with a €60m release clause, Zivkovic is one of those players who Benfica would make it hard to leave. The 21-year-old winger isn’t a regular goalscorer, having only one goal since his arrival in 2016, but his frequent assists are a reason why they believe in his potential.

The Portuguese media seem to periodically link Arsenal to the player, perhaps in the hope of a big offer arriving one day.

A good performance against Manchester United can only help the outline idea.