On Wednesday, Mundo Deportivo explained that Arsenal are ‘best placed’ to sign Barcelona’s Philippe Coutinho, and he wants to return to the Premier League this summer.

It was also stated Kia Joorabchian has a ‘great relationship’ with Arsenal chief Raul Sanllehi, and the agent has been ‘working for months’ to take his client back to England.

This has been relayed in today’s edition of Mundo Deportivo, and the newspaper has also provided their own information on this case.

It’s claimed the price tag is becoming a ‘problem’ for the north London club.

Barca ‘only want money’ for Coutinho, as their plan is to recover a large part of the money they invested in signing the player from Liverpool. According to the report, the Spanish giants are looking for around €80m for the attacking midfielder.

Mundo states there are ‘sporadic negotiations’ for the South American’s transfer, although an immediate outcome isn’t expected. 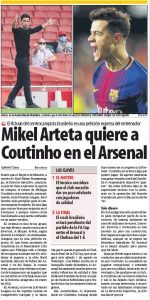 They once again stress Arsenal are ‘best placed’ to sign Coutinho, but the negotiations aren’t expected to be stepped up anytime soon.

The Catalan press has repeatedly explained Barcelona are keen on offloading Coutinho this summer.

It remains to be seen whether they will do it through a sale or by sending him out on loan.