The Juan Cuadrado situation at Juventus is quite an interesting one.

Bought from Chelsea towards the end of lsat season, few expected the Colombian to be at the centre of a transfer saga, if you want to call it that, yet Arsenal, and now AS Roma, have taken an interest in his services.

While the Serie A champions’ stance regarding their right-winger is that he’s ‘unsellable’, as per Gazzetta dello Sport, a few things could push him out, notably the arrival of Baldé Keita. 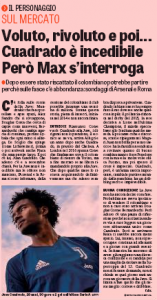 Already facing strong competition thanks to Douglas Costa and Federico Bernardeschi transferring to Turin, adding the Senegalese forward to the mix makes things even more difficult for Cuadrado as he looks to be a regular under Max Allegri.

Down his end, the player doesn’t appear bothered, according to the Italian newspaper, going about his business as usual and not asking questions about his future at Juventus.

Arsenal and Arsène Wenger are once again said to have asked about his availability, and Gazzetta state a sale, were it to happen, could bring Juventus around €30m, which seems a bit low in today’s market.

Still, not a lot can be done for now, and it seems, whether he likes it or not, Cuadrado’s future could be tied to Baldé Keita’s.

Until then, as Gazzetta say, all he can do is what he does best: run and dribble.