Mikel Arteta has publicly expressed his desire to retain Dani Ceballos and there has been repeat claims in the Spanish press about Arsenal’s interest in taking him back, either on loan or a permanent transfer.

The midfielder’s loan deal with the Gunners has expired and two days ago, both AS and Marca explained that Real Madrid are planning on keeping him for the next season.

Mundo Deportivo have provided their take on the 24-year-old and also an insight into Los Blancos’ preparation for the summer window.

It’s claimed the La Liga winners have altered their transfer plans due to the financial impact caused by the Covid-19 crisis.

As per the report, Real Madrid have turned their attention towards those players who are out on loan to reinforce their squad for next season.

With regards to Ceballos, Mundo state the Spain international’s ‘immediate future is unknown’.

Him staying at Madrid will be ‘directly dependent’ on whether or not James Rodríguez is sold this summer. The Colombian has a year left on his contract.

Mundo also add another option Real Madrid are studying is to ‘relinquish’ Ceballos, and he’s not lacking suitors. 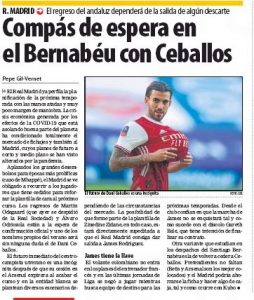 Arteta’s side are mentioned again as the Premier League club and Real Betis are ‘best placed’ to sign him this summer.

If Mundo’s report is to be believed, Arsenal’s chance of signing Ceballos will improve if the Spanish side fail to offload Rodríguez.