With just over two weeks left in the transfer window, things can happen very quickly, and Jeff Reine-Adelaide’s exit from Arsenal is an example of that.

Earlier on Wednesday, we covered a story in Ouest-France claiming the youngster had a ‘priority destination’ in mind for his future, and that was Angers in France.

Having already spent time there on loan from the Gunners during the second half of last season, the young midfielder was open to a return, but there were no details in the article about how this would happen.

Well, picking up where the local publication left off, RMC Sport bring more details, claiming the 20-year-old’s transfer to Angers is ‘one step away’. 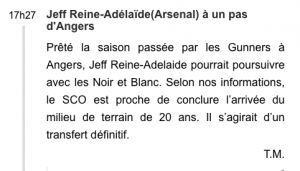 Furthermore, the media outlet believe the deal taking Reine-Adelaide to the Ligue 1 club will be a permanent transfer.

The fee has yet to be revealed, but with just one year left on the France U20 international contract at the Emirates, we doubt it’ll be that much.

During his three years at Arsenal, Reine-Adelaide made eight appearances for the club’s first-team, all of which came in the FA Cup and Carabao Cups.