Arsenal are one of the sides interested in Barcelona’s Philippe Coutinho, as per reports.

The La Liga side need to lower their salary budget to bring in reinforcements in the winter market. The attacking midfielder, who is not included in Xavi Hernández’s key plans, is the highest paid player at the Camp Nou and his exit will be beneficial for the Blaugrana.

Sport now claim the 29-year-old’s agents have understood the ‘seriousness’ of the situation at the club and their ‘imperative need’ to let him move elsewhere next month.

Barca sent an ‘SOS message’ to the Brazil international and his representatives a few days ago. Mateu Alemany, the club’s sporting director, is in constant contact with Kia Joorabchian and Giuliano Bertolucci, the two men who take care of Coutinho’s future.

The ex-Liverpool star’s agents, especially Joorabchian, have close ties with the Gunners.

It’s claimed the north London club are ‘working’, likely to sign the South American. Sport are of the belief Mikel Arteta’s side lack a creative attacking player and Coutinho could be an answer to that.

The newspaper states: ‘There is time and a lot of predisposition to reach an agreement 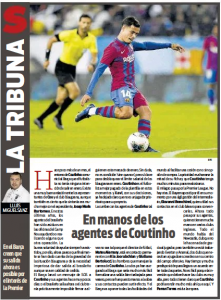 between all the parties. It is not easy because the investment that the clubs must make is very high, but everyone is clear that Coutinho could yield much more there than here.’

Barcelona’s priority is to save half of Coutinho’s salary and to do that, they are ‘going to put all the facilities in the world’ to let the player leave on loan, with or without a purchase option.

With the ‘interest’ from the Premier League, where Arsenal are ‘working’ to get Coutinho, Xavi’s side believe his ‘departure is now possible’ in January.