Arsenal ‘would like to get’ Edmond Tapsoba from Bayer Leverkusen this summer but may need to offer an astronomical fee to get him.

That’s according to Kicker, who say it will take ‘transfer fee in Havertz dimensions’ for Arsenal to get the centre-back.

The newspaper explains that Leverkusen are not keen on selling one of their star players this summer, and, with Tapsoba locked into a deal until 2026, there is no need for them to do so.

They would resist all offers this summer, but Arsenal are keen as they look to rebuild their defence this summer. 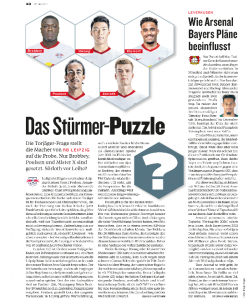 They’re not willing to wait until next year to get their man, but it would take a fee in the region of €80m plus bonuses, the same that took Havertz to Chelsea last year, to change Leverkusen’s mind.

It is ‘unlikely’ that Arsenal would go that far in the current climate, where finances have been decimated due to the Covid-19 pandemic.

Thus, at this point, a move to the Emirates looks extremely unlikely to Tapsoba, who will simply be priced far too high for the Gunners.

Arsenal ‘do not give up’ in bid to sign player – ‘New contacts’ in the ‘last few hours’, more expected