As far as French newspaper L’Equipe are concerned, Arsene Wenger looks set to continue at Arsenal beyond the current season, and already has big plans in place for the summer.

Not wanting a repeat of the current season, and understandably wanting to make his future exit under better circumstances, L’Equipe say Wenger is set for an ‘unprecedented recruitment effort’ at Arsenal in the next transfer window.

Wenger is determined to turn things around at Arsenal and it’s accepted a big financial push is needed to help that.

On the subject of Alexandre Lacazette, the French newspaper say they’ve spoken to the player’s agent who has rubbished Spanish claims of a deal already being agreed with Atletico Madrid. 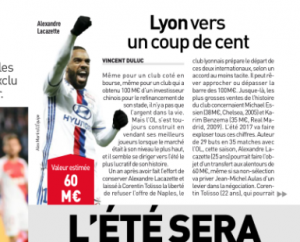 The agent did however reveal there is widespread interest in the Lyon striker.

L’Equipe say Arsenal are one of the clubs involved and a potential transfer fee is put at around €60m.

That’s a little over £50m but it’s the kind of level Arsenal would need to go to to justify claims of an ‘unprecedented recruitment effort’.