Friday’s edition of Marca has a rather bullish article on Thomas Lemar to Arsenal.

Marca say Atletico paid €72m in a deal which sees Monaco due 30% of a future transfer fee. The signing hasn’t worked out at all well and this month has seen numerous Spanish reports about Diego Simeone’s side wanting him out.

They need to trim their wage bill to bring others in, and Lemar has been the chosen one.

Marca state ‘all roads lead to Arsenal’ for Lemar. The operation is described as being ‘very well on track’ and it’s thought Atletico will receive a good chunk of the money they paid for the player. 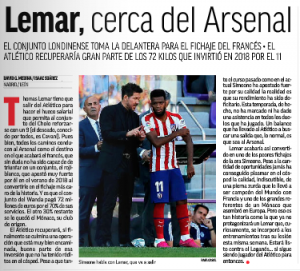 There’s not a lot of detail, just confidence Arsenal can soon be the player’s new home.

It sounds like Atletico have been the ones to approach the Premier League club, so Marca’s information is likely coming from someone connected to the rojiblancos, so whether they’re sharing false optimism or not should soon be known.