Tuttosport is probably one of the newspapers with the best ability to writenumerous transfer claims about a single club per day. They’ve been doing it for years now, and things get quite big when summer approaches.

Today, on one page, they link the Old Lady to three Premier League players: Emre Can, Alvaro Morata and Hector Bellerin.

The Arsenal player is the one who gets the biggest attention from all three, but ironically, he’s the one the newspaper has the least information about.

The story Bellerin is involved in is about Juventus’ fullback changes in the transfer market. Stephan Lichtsteiner, Kwadwo Asamoah and Alex Sandro could all be leaving the club, and that obviously means that replacements must be signed. 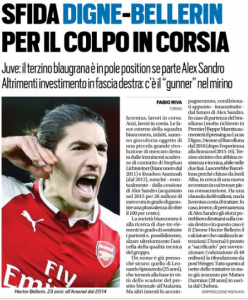 Leonardo Spinazzola and Lucas Digne are those who would replace the left-backs, and the only one being considered for the right side is Hector Bellerin.

We’d like to point out here this completely ignores numerous Tuttosport claims that Matteo Darmian arriving is a sure thing.

Tuttosport claims Arsenal would be demanding €40m for his transfer, in what is called a ‘rebuild’ after Wenger’s departure. But there’s no information on how much Juventus are willing to pay. It seems it will all depend on the Old Lady’s departures in the summer.

€40m for Bellerin? Come on, he’s not had a great season but that seems a little too reasonable.