The financial impact caused by the Covid-19 pandemic has forced Barcelona to not only raise funds by selling players, but also lower their wage bill for next season.

Arsenal’s interest in the 28-year-old has been constantly stressed in the Catalan media, partly because of the Gunners’ good relationship with his agent, Kia Joorabchian.

The Brazil international will return to Camp Nou after completing his loan spell with Bayern Munich.

Friday’s edition of Mundo Deportivo gives a background on how the La Liga side completed the playmaker’s transfer from Liverpool and what went wrong for him at Barcelona.

Part of the blame has been put on Ernesto Valverde because the former manager played Coutinho on the wings rather than in his preferred position.

When discussing his future, Mikel Arteta’s side get a mention. It’s claimed ‘Arsenal want him’, and Barcelona have softened their stance on a potential transfer.

Quique Setién’s side are looking for a fee around €80-90m to let Coutinho leave this summer. If ‘no offer of that calibre arrives’, they will let the player leave on loan so that they can save on wages.

Arsenal could benefit by signing Coutinho on loan, considering they are also facing financial issues. 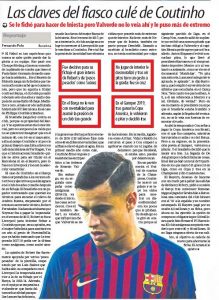 According to El Confidencial, Arsenal are the ‘most interested’ side in the South American but they could only take him on a temporary deal.

Joorabchian’s good relationship with the north London side is mentioned again and the report adds this could be ‘decisive’ in helping the Premier League side take Coutinho, and also Sergio Reguilón.

Reguilón is on loan at Sevilla from Real Madrid and the left-back is on Arsenal’s ‘agenda’ for this summer.