Arsenal’s desire to sign Neto from Barcelona is something which has been covered repeatedly in Spain over the past few days.

Mikel Arteta is looking for a better standard of competition for Bernd Leno, and with Neto being frustrated at the Catalan club the dots have been joined and he’s been presented as a target.

Over the weekend, Ronald Koeman confirmed that Neto’s agents have requested a move in the winter market, however, the Barcelona manager doesn’t want to see him go if no replacement comes in.

Despite such a stance it doesn’t feel like an impossible quest, especially if Neto is pushing for a move. The problem related to Arsenal would be the stopper not getting minutes in London either, with Arteta clearly keen on keeping Leno as his number one going forward. 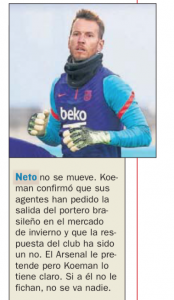 AS state ‘Arsenal want him’ and the newspaper then presents Koeman’s stance.

What happens in the coming days will be key, and should Arsenal make a firm approach, and Neto’s agents continue to press, then it could see the situation change.