Former Arsenal goalkeeper Vito Mannone has revealed how his move to the Emirates at just 16 was like ’a gift from heaven’.

The Italian goalkeeper is currently plying his trade for Monaco in France, the latest club in a career than has seen him play in Italy, England, America and Denmark.

He originally made his breakthrough at Atalanta in his homeland before being spotted by Arsenal, who elected to bring him to London on a permanent deal worth £450,000 in July 2005.

At that point in time, the club remain focused on trying to secure the best young talent for the future, a staple of the Arsene Wenger regime.

They viewed Mannone as one such player, and Mannone has detailed what it was like to arrive at a club that was packed with legends.

“I was playing as a youngster at Atalanta,” he told L’Equipe.

“My dad had just died when, after an Atalanta-Brescia derby, an Arsenal scout came to see my mum to ask her to come and give me a four-day trial at Christmas.

“It was only twenty days after my father’s death. I think it was a gift from heaven. I couldn’t tell Atalanta; it was a secret.

“So I went for a trial with the “Invincibles”: Pirès, Henry, Ljungberg, Vieira, Bergkamp, Campbell… My legs were shaking a little, but it was fantastic.

“Wenger liked me and agreed that I would become number 3 the following summer. I couldn’t say no. It was a chance for me and my family to make a new start.”

Unfortunately for Mannone, things never really got off the ground for him at Arsenal, for whom he would make only 23 first-team appearances in total.

Indeed, he spent most of his time at the club out on loan, with spells at the likes of Barnsley and Hull before a permanent move to Sunderland in 2013.

He went on to establish himself as first choice for the Black Cats, making 80 appearances in four seasons for the club before leaving for Reading in 2019.

One season saw him named the club’s Player of the Year, a success he says was like a bit of revenge for his rejection by Arsenal.

“At Arsenal, I played about 30 matches. Of course, I would have liked to play more. But, considering the matches, it’s as if I had played a hundred,” he added.

“Then I went to Sunderland. I wanted to show everyone that I belonged in the Premier League. 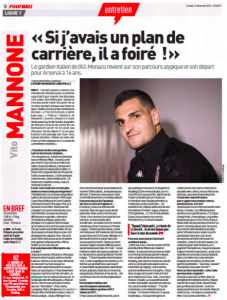 “I had a great season; I was named player of the year of the club. When I went back to the Emirates, Wenger asked me to be in his office after the match.

“Let’s just say that the relationship between us was difficult because I wanted to play more. He said: ‘I am really happy with what you have become.’

“It was a little revenge for me. It was wonderful to hear that. It was eight years of suffering, because he kept telling me that I could represent the future.”