Arsenal scouts were once again spotted in Lisbon last night, as Benfica drew 3-3 against Estoril at the Estádio da Luz. The result has given the Eagles a place in the cup final, as they had previously beaten Estoril 2-1 away.

Although Arsenal emissaries are frequently seen in Portugal with no clear targets, this time Record claims Arsene Wenger’s men are interested in two specific players.

One of them is the former Fulham striker Konstantinos Mitroglou, who has scored 25 goals this season. The player had already been linked to Wenger’s side earlier this season, and his reputation isn’t great in English football.

Despite his great season, if Wenger was to sign the Fulham flop it would cause riots among Arsenal’s more stressed out supporters.

Mitroglou ended up being left out of the match-day squad, and according to Record, the Arsenal scouts were already aware of that. 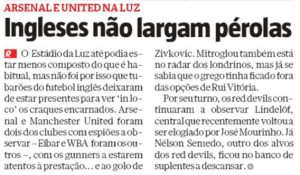 The other target was Andria Zivkovic.

The 20-year-old winger was Benfica’s best player last night, and besides creating most of their chances, he scored a wonderful goal, his first for the club.

The player joined Benfica from Partizan last summer on a free transfer, and despite not having much game time so far, has already managed to make ten assists for the Eagles.

Considering that the youngster has a €60m release clause, this report could be the start of a very long saga involving Arsenal for the next transfer market.