The Toffees have been expected to complete the signing of the Juventus player for a few days, after a chase which has been going on for several weeks. Tuttosport, a Turin newspaper, reports Unai Emery’s side tried to divert the player to them by talking to his agent Mino Raiola.

However, the late Arsenal effort hasn’t helped, with Kean and his camp believing there’s a greater chance of regular football at Goodison Park. It’s explained the reason he’s leaving Juventus is for regular football so there’d be little point him going somewhere the chance of that isn’t high.

Everton have given the player ‘ample guarantees’ about his progression and game time with them.

Tuttosport claim Raiola has been in Liverpool where he’s been joined by Juventus chief Fabio Paratici to close the last aspects of the transfer. According to the report, Everton 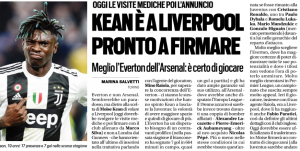 will be paying €27m which could rise as high as €40m if all personal and team goals are achieved.

It’s worth noting there’s been so many different fees claimed that it’s perhaps best waiting until the dust has settled to see what is then reported by those close to Juve.