After weeks and weeks of Juventus edging closer to Arsenal’s asking price for Wojciech Szczesny, it seems like there’s finally light at the end of the tunnel for the Poland international.

Left behind by the Gunners as the Premier League club jetted off on their preseason tour, the 26-year-old has just been waiting around (and we assume training by himself) for the two sides to reach an agreement, and that could happen in the next 72 hours.

Gazzetta dello Sport on Monday report the Serie A champions have decided to accelerate on getting at least two players in before the club departs on their preseason tour to the United States, and those two are the aforementioned goalkeeper and Federico Bernardeschi from Fiorentina. 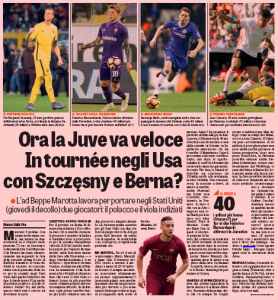 The Italian newspaper state the gap between Arsenal and Juventus has grown smaller, and the player ‘is coming’ to Italy, and one of the ‘strong favourites’ to be a part of the Champions League finalists’ preseason squad on the 20th of July.

This corroborates a lot of reports claiming the player was getting closer to becoming Gianluigi Buffon’s successor in Turin, which should happen after one season spent mostly on the bench.

Worth the sacrifice? Szczesny seems to think so.