Hector Bellerin to Barcelona rumbles on in Spain, largely because Barcelona really need a right back. On Thursday, Catalan newspaper Mundo Deportivo wheeled out the Barca DNA line, one which Arsenal fans are common with since the Cesc Fabregas saga.

Barcelona’s pursuit of Fabregas took things to a whole new level in transfer chases, with Arsenal pretty much being painted as the nasty English uncle holding a child hostage and not allowing him to return home to his real family.

It’s not likely to get to those levels again, largely because even if he does harbour a desire to return to Barcelona, Hector Bellerin will consider himself far too cool to go down the desperate route.

Mundo Deportivo managed to dig out a photograph of Bellerin as a child in La Masia’s system, they also had photographs of a little Thiago Alcanatara and little Oriol Romeu, the latter bearing a resemblance to a young Richard Ashcroft.

The message was clear… La Masia products are only ever really on loan, you may sign a Barcelona player but you can’t extract his DNA.

Still, despite of all this, Arsenal would ask far more for Bellerin than Barcelona would want to pay. The fullback recently signed a new long-term contract, which irked the Barcelona media, and Arsenal hold all the power. 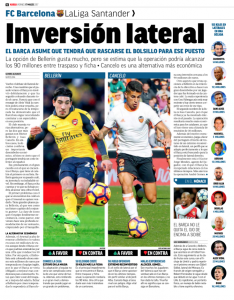 Marca report on Friday that signing Bellerin would require an ‘important economic outlay’ from Barcelona. The transfer fee would be between €50m and €60m, according to the Spanish newspaper, and with the player’s contract the whole deal would be worth around €90m.

It’s a lot and at that level of investment Barcelona may be better looking at someone like Joao Cancelo, suggest Marca.

With the money saved they could probably have some Barca DNA cooked up in a lab and inject it into Cancelo at his unveiling ceremony.