If there’s a near certainty this summer, it’s that a bidding war will break out for Bordeaux’s Malcom, with both Arsenal and Tottenham ready to be right in the mix when the time comes.

The Brazilian forward already wanted a move in January, only to be barred by his club from switching allegiances, before eventually giving his word to the Ligue 1 side he would stay and give his all until the end of the season.

This is what the 20-year-old revealed in an interview with Sud-Ouest on Friday ahead of this weekend’s game against Angers, where he discussed various things, including his future.

Making it clear he didn’t read the rumours in the press, social media, however, is a big part of his life, and there’s only so much he can avoid with excitable fans all over the world. 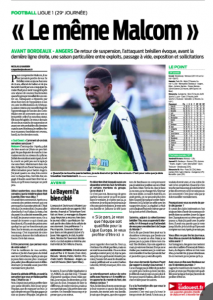 He said: “On Instagram, people put me in Arsenal, Tottenham or Bayern shirts. Even if it’s my dream, it makes me laugh. I play for Bordeaux. At the moment, that’s all I think about.”

With a strong desire of playing the Champions League and to play for a ‘very big club’, there’s every chance the young forward will get his wish granted come the summer.

And with the Gunners and Spurs comfortably able to afford the €50m (minimum) Bordeaux will be asking for come season’s end, the photoshops could soon become reality.

Rangers star’s ‘desire to emerge’ led to agent offering him around...