Home Premier League Arsenal Arsenal told only ‘an offer from another world’ will get them player...
SHARE

Porto midfielder Danilo is one of those players who are often linked to Premier League moves, but their clubs always make sure to block the transfer in time.

His name has been getting quite a few mentions on Sport Witness lately, as according to the Portuguese press, Arsenal’s interest in signing him has returned, as the Gunners recently sent scouts to watch some of his last performances of the year.

But, unsurprisingly, it seems that Danilo is going nowhere, at least in the January transfer market. That’s what Record is reporting today. 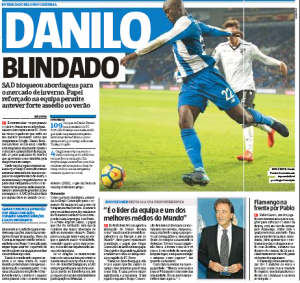 They claim that Porto have been receiving approaches from some clubs, but all of them are being turned down, as only ‘an offer from another world’ would take the midfielder from the club right now.

Danilo is considered to be far too important to be leaving the Dragons in the January transfer window, since losing him at this point of the season would have a big impact in the race for the league title.

Record doesn’t say how much the offer ‘from another world’ would be, but since the midfielder has a €60m release clause, that should probably be something close to that.

Arsenal don’t get a mention in the story this time, although it wasn’t Record who said the Gunners recently watched him, but A Bola.

Would Arsene Wenger sanction such a move in January? It’s unlikely, and Arsenal can join the growing list of clubs having a general interest in Danilo but not yet being able to take it anywhere.