With Alexandre Lacazette’s future up in the air, a new striker could be needed at Arsenal sooner rather than later.

There have been a few names circulating, but a new one has appeared on Monday, with Tuttosport claiming the Gunners are now after Andrea Belotti.

The Torino striker is currently with the Italy national team at the Euros as Ciro Immobile’s backup, but an exit from his current club has been rumoured for quite some time.

José Mourinho is a big fan of his, wanting him first at Tottenham and now at AS Roma, but the Italian newspaper state Arsenal are ‘the latest’ to join the race. 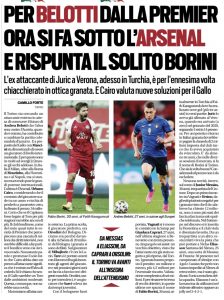 With just one year left on Belotti’s contract, Torino know they can only get a limited amount for their star, meaning Urbano Cairo, their chairman, has set a price of €34m.

It’s the fee they want, and it’s one Tuttosport believe Arsenal ‘won’t have any difficulty’ in putting together for the striker, whom the club appear resigned to lose since they’ve set a price.

That’s debatable, especially if the Gunners do end up plumping £50m or so on Ben White, as it’s been made very clear that the funds at the Emirates aren’t endless.