With the transfer window fast approaching, clubs are starting to put their machines into gear and seriously looking at who they could buy on the cheap without losing too much quality.

One of the obvious choices in Italy, it seems, appears to be Dennis Praet, whose versatility through the middle is very attractive to a number of clubs, including Arsenal.

The stories surrounding the Gunners’ interest reemerged early last week thanks to Corriere dello Sport, only to continue over the weekend and into this week, as Gazzetta dello Sport report Inter have now joined the seemingly ever-growing queue for the Belgian.

Expected to cost somewhere between €20-25m, Praet is an attainable target for all involved, yet, much like what Tuttosport stated on Monday, Arsenal are the big problem here. 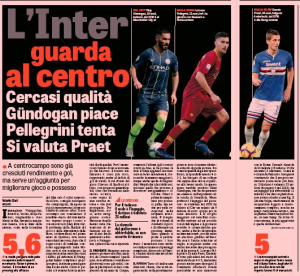 In fact, Gazzetta explain that, of all the competition for the midfielder’s signature, the Gunners are the ‘most threatening’.

Whether that is their financial abilities coming into play or simply Praet potentially preferring a move to England instead of an upgrade in Italy isn’t said, but that’s two newspapers now making it clear Arsenal appear serious on the matter.