Home Europe Arsenal target given 20 days to sort out his future – Club...
SHARE

With Pierre-Emerick Aubameyang and Alexandre Lacazette already at the club, do Arsenal need a new striker?

It appears Mikel Arteta thinks so or the Gunners wouldn’t allegedly be interested in Arkadiusz Milik, who remains in a contract renewal tussle with Napoli.

Gazzetta dello Sport look at the Poland international’s situation on Friday, and Aurelio De Laurentiis is simply getting fed up.

The headline sums it all, as the Italian newspaper explain the Napoli owner has told his player’s agent he has 20 days to reach an agreement with the club or he will be sold.

That’s great news for interested parties such as Arsenal, Juventus or Atlético Madrid, but even if De Laurentiis decides to cash in on his striker, he won’t do so for pennies.

It’s been communicated to Milik’s agent that Napoli want €50m for his client and they will not talk to any club for less than that.

The forward’s current contract with the Serie A side is set to expire in 2021, and they would ideally like to extend that to 2024 with a wage of around €5m/year. 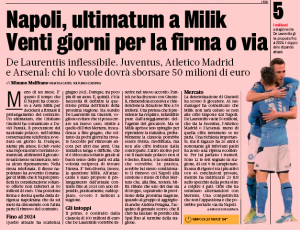 However, De Laurentiis also wants to include a release clause of €100m, which David Pantak, the agent, finds excessive and wants reduced to around €50m.

The second issue is Milik is worried about how much game time he will get going forward, especially since Dries Mertens appears ready to stay and there will be added competition for the role when Andrea Petagna, bought in January, returns from his loan at SPAL.

Nothing has been agreed yet, and that leaves the door open for Arsenal if they do end up needing a new striker,

Perhaps this is all in case Aubameyang, whose contract also expires in 2021, is sold in the summer?